A controversial Indian spiritual guru has been sentenced to 20 years in prison for rape, India’s Central Bureau of Investigation announced Monday.

Gurmeet Ram Rahim Singh, head of the spiritual sect Dera Sacha Sauda, was convicted on Friday of raping two of his followers in a case that dates back to 1999. The minimum sentence for rape is seven years.
He was sentenced to two consecutive 10-year terms, one for each conviction.
Singh was sentenced behind locked doors inside Rohtak jail, where he arrived by helicopter Friday from a courthouse in the northern city of Panchkula. The move came in a bid to prevent supporters gathering outside.
Security forces in northern Haryana state are set to remain on high alert after supporters were involved in deadly protests following his conviction.
At least 36 people were killed in Friday’s violence and hundreds more injured, as supporters of Singh’s rampaged through several northern states, setting fire to empty train carriages and burning cars. 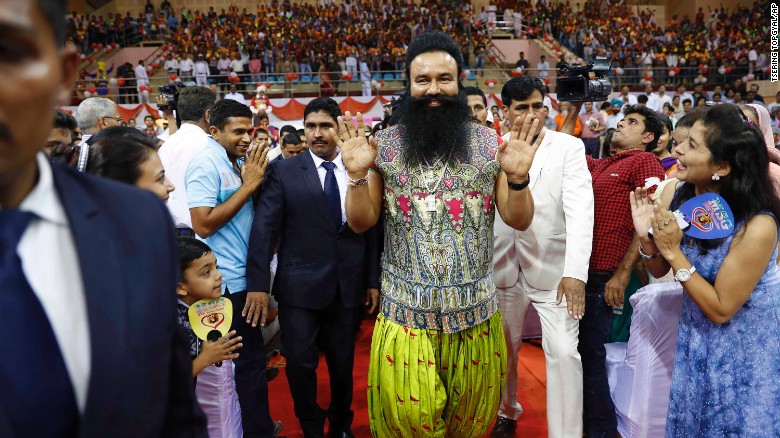 Gurmeet Ram Rahim Singh, center, greets followers as he arrives for a press conference in New Delhi, India, in October 2016.
Singh, known as the “guru of bling” on account of his flamboyant lifestyle, commands a vast and loyal support base throughout the region, and while no new clashes were reported over the weekend, security remains tight, with internet and SMS services shut down in parts of both Punjab and Haryana states until Tuesday.
Deputy Commissioner of Police in Panchkula, Manbir Singh, told that additional army and paramilitary forces have been deployed and are expected to remain on guard until Wednesday.
Indian Prime Minister Narendra Modi has also condemned the violence.
Speaking on his monthly radio program “Mann ki Baat” (“Straight From the Heart”) on Sunday, Modi reminded listeners that India was the home of “Gandhi and Lord Buddha” and that violence was not in the country’s culture. 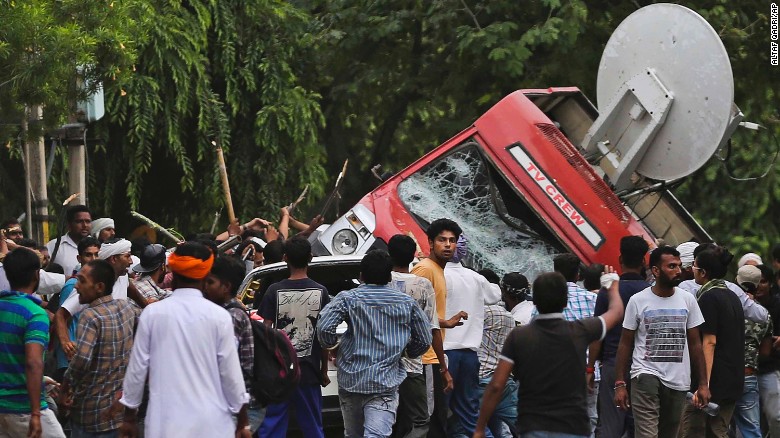 Dera Sacha Sauda sect members overturn an OB van on the streets of Panchkula, India, Friday, Aug. 25, 2017.
Dera Sacha Sauda, which describes itself as a “selfless socio-spiritual organization,” has ashrams across 10 states and union territories across India and claims to have millions followers worldwide.
In the small town of Sirsa, located 150 miles away from Panchkula, thousands of devotees have gathered at the group’s headquarters.
“The followers are still inside the compound and they could be in the numbers of 10,000 and upwards though people are leaving the compound,” Vijay Kumar, the Deputy Superintendent of Police in Sirsa, told CNN.
Kumar added that a curfew and a ban on the gathering of five or more persons will remain in place in Sirsa throughout the coming days 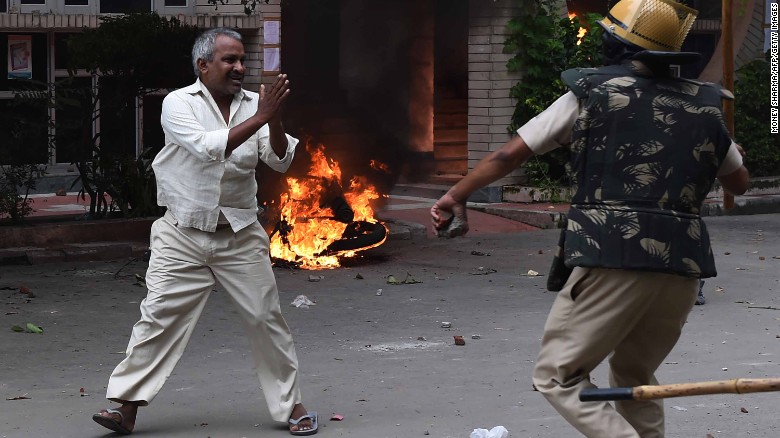 A follower of Indian religious leader Gurmeet Ram Rahim Singh pleads for his safety after being hit with a stick during clashes between the controversial guru’s followers and security forces in Panchkula on August 25, 2017.Singh is a surprisingly influential figure in India, where he is considered a cult icon and performer.
He is the star of five films and numerous popular music videos, including the “Messenger of God,” in which he acts as the hero who saves the nation.
His look is part-biker gang member, part Hindu epic hero.
In one of his most popular music videos, “Love Charger,” Singh appears clad in a rhinestone-studded motorcycle vest with an embossed image of a lion on the back, while he sings before an adoring crowd.
India’s Central Bureau of Investigation first picked up the case against Singh in 2002, but charges were only formally brought against him in 2007, according to the bureau’s R.K. Gaur.
Singh is also at the center of an  murder investigation.