31 August Bangkok-Thailand’s former Prime Minister Yingluck Shinawatra has fled the country as a court was about to deliver a verdict in a two-year trial over agricultural subsidies, a source close to her family says.

The source declined to say where she had gone, but Thailand’s top immigration official said there were no records of Yingluck having left through proper channels.
Yingluck failed to show up to hear the verdict being delivered. Her lawyer said she was ill but the court rejected the explanation and Thailand’s Supreme Court issued an arrest warrant.
The lawyer, Norawit Larleang, told CNN that he didn’t know whether the former prime minister was in Thailand or had left.
Yingluck — ousted by a military coup in 2014 — had been barred from leaving Thailand without court approval since 2015, when her trial started.
Her bail of 30 million baht ($900,000), posted when the trial began more than two years ago,has been confiscated.
Yingluck faced up to 10 years in prison for alleged negligence over a rice-buying scheme, which cost the country billions of dollars. The court has set a new date for the verdict of September 27.

In 2016, Yingluck pledged to see through her trial, and said that she had not considered leaving the country.
Former Thai PM: ‘I’ve never thought of fleeing’ 01:51
“I stand firm to fight my case. All eyes are on me. I have duties and responsibilities to carry on.
“I assure you, I’ve never thought of fleeing.”
The rice subsidy program, introduced in 2011, pledged to pay farmers well above the market rate for their crop, and ended up costing the country billions.
But critics said it wasted large amounts of public funds trying to please rural voters, hurting exports and leaving the government with huge stockpiles of rice it couldn’t sell without losing money.
Yingluck said the rice subsidy scheme was “beneficial for the farmers and the country” and that claims it lost money were wrong and motivated by political bias against her.

Yingluck’s no-show was a “big surprise” to most people in Thailand, Thitinan Pongsudhirak, a political scientist at Chulalongkorn University told CNN.
“The way that she had fought, it had looked like she was willing to go through with (the trial).
Thitinan said Yingluck’s decision to skip the verdict hearing will have “emboldened” the military government. 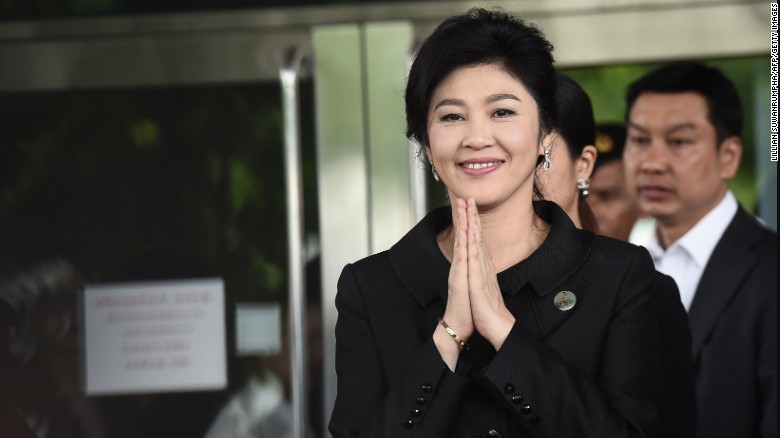 Former Thai prime minister Yingluck Shinawatra greets her supporters in Bangkok on July 21, 2017.
“They would not have wanted to put her in jail, in this scenario, (but her not showing up today) puts her on the back foot and gives them an edge.”
There was only “low risk” of unrest following her absence, he added.
“The military government have been suppressing dissent and suppressing demonstrations. (Her supporters are) fanned out over the country so it is hard for them to mobilize.”

Hundreds of Yingluck’s supporters who’d been waiting outside the court for the verdict quickly dispersed once word spread the former Prime Minister hadn’t appeared.
Thai police had deployed 3,000 officers to the streets ahead of the hearing to guard against potential protests. At one stage, lines of police stood ready to repel any demonstrations.
As many as 1,000 supporters had gathered to hear the verdict, lining up behind barricades and crowding footpaths in nearby streets. Many were dressed in black to mourn the late King Bhumibol Adulyadej, who died last October. 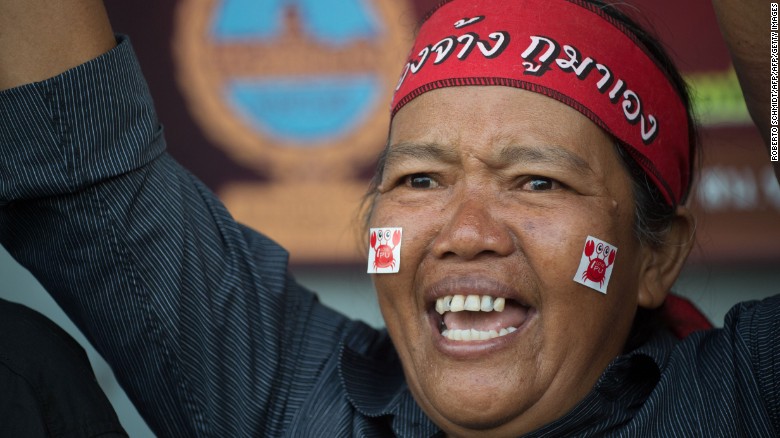 A supporter of former Thai Premier Yinluck Shinawatra shouts as she and others wait for her arrival at the Supreme Court in Bangkok on August 25, 2017.
The crowds came despite a plea from Yingluck on Facebook to stay away from the court due to security concerns.
Reporters outside the government complex which houses the Supreme Court said her supporters were ignoring police requests to stay in predetermined protest areas.

When she was inaugurated in 2011, Yingluck became Thailand’s first female prime minister and its youngest in over 60 years.
After the 2014 coup, she was impeached by Thailand’s military-appointed National Legislative Assembly. The ruling barred her from political office for five years.
At the time, Yingluck said she had behaved with integrity and honesty during her time as prime minister.
Amid the outcry over the rice subsidy scandal, Yingluck was investigated by Thailand’s National Anti-Corruption Commission (NACC) for the rice subsidy issue and put on trial. Proceedings have lasted more than two years.
Thaksin Shinawatra, Yingluck’s brother, was overthrown as Prime Minister in a military coup in 2006. Thaksin is living in self-imposed exile to avoid corruption charges,(source CNN).